She and her partner Chris thought their family dreams were over. That was until Amber’s generous sister Taylor stepped in and offered her eggs.

Remarkably Amber is now pregnant with twins! Read her incredible story below…

Never in  wildest dreams did I even think I would be celebrating my own baby shower! I still can’t believe how lucky I am to have such a selfless sister who would donate her eggs to us and end up being pregnant with a baby girl and baby boy!! I will never be able to find the words to express how greatful we are too you but please know we love you so so much ?? @taymahoney3 @toddey89 #pregnant #pregnantwithtwins #twins #twinpregnancy #bumpie #bumpday #babyshower #sisters #bond #finace #love #ivfjourney #ivf #ivfsuccess #ivftwins #eggdonation #inspirepregnancy @fleuranddahliaflowers

In October 2014, Amber and her fiancé Chris decided to start trying for a baby and a few months later in February she began experiencing hot flushes, around 20 a day.

“I decided to go to the doctor and he joked saying maybe I was going through menopause, I just laughed it off,” she told House of White.

“It was decided I just had a virus and was to rest.”

Amber went for a second opinion and she was told her follicle-stimulating hormone (FSH) level was at 75, which is menopause range. Anything higher than 10-15 may indicate diminished fertility. At the time, Amber was only 23.

Menopause that happens earlier than the expected age of around 50 years is called premature or early menopause. This may be due to primary ovarian insufficiency.

“I’ve always wanted to be a mum, so I was in so much shock,” she says. “I remember crying and asking the doctors whether I could still have children.

“My doctor didn’t seem too concerned at this point saying I was still so young and not to worry.”

Amber was referred to a gynaecologist, who found a 7cm cyst on her ovary which had to be removed.

“I was under the impression that once the cyst had been removed hopefully my hormone levels would return to normal,” she says. “Unfortunately this was not the case.”

Amber was put on ovary-boosting drug Clomid for six months, but she never ovulated and they turned to IVF. After two failed cycles of IVF, Amber was informed that both of her ovaries were not working.

That’s when Amber’s sister Taylor stepped in and offered her eggs.

Have the most amazing time in fiji you deserve it!! I’m so jealous I wish we could be this tanned all the time ☀️☀️ @taymahoney3 #takemewithyou #samebutdifferent #sisters

“My sister is the most beautiful lady you will ever meet inside and out,” she says. “Taylor has been in a long term relationship but does not have children of her own.

“Taylor was a trooper injecting herself morning and night to stimulate her follicles. I also went on the pill to make our cycles co-inside then started taking medication to make my lining thicker to house the embryo.”

The first round of IVF was unsuccessful, but the second time was a success and Amber called Taylor over to show her the tests.

“I showed her the tests and she burst out crying, it was the best feeling in the world,” she says. “A week later I started bleeding and was rushed in for a scan, to my surprise I was bleeding because I was pregnant with twins!”

Amber says while pregnancy her hasn’t been easy, she feels extremely lucky, but she has since given birth to Archie and Annalise, who are now two months old.

“My whole journey was worth every minute now I finally have my baby girl and baby boy in my arms,” she says. “It’s been a long road but it’s worth it.”

Thanks Amber for giving us permission for sharing your incredible story with us. What a fantastic sister you have. We wish you all the best in the future. 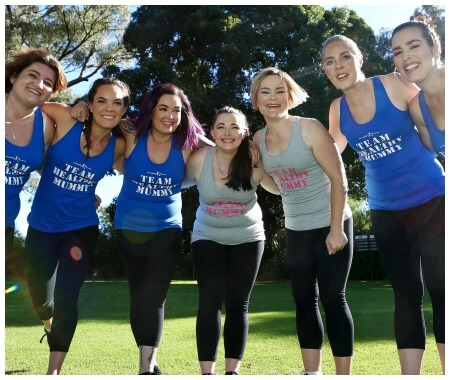 Slow and steady wins the race! It’s not always favourable to try and lose a heap of weight in a short space of time, as…
END_OF_DOCUMENT_TOKEN_TO_BE_REPLACED

We are so excited to launch a brand NEW Healthy Mummy App with a NEW look, NEW content & recipes and brand NEW tips and…
END_OF_DOCUMENT_TOKEN_TO_BE_REPLACED

Are you ready to SMASH your health and weight loss goals in 2022! Make sure you’re signed up for the next round of the 28…
END_OF_DOCUMENT_TOKEN_TO_BE_REPLACED

The Healthy Mummy is launching a NEW 12 Week Challenge designed to give our mums extra motivation and accountability to reach their goals.
END_OF_DOCUMENT_TOKEN_TO_BE_REPLACED

With the kick off of another 28 Day Weight Loss Challenge Healthy Mummy mums have been busy in their kitchens getting their meal prep done….
END_OF_DOCUMENT_TOKEN_TO_BE_REPLACED