A blogger has had her breast implants removed after she claims they caused her to suffer acne, body odour, weight gain and fatigue.

Sia Cooper, the 29-year-old behind the blog Diary of a Fit Mommy, posted a photo of herself to her more Instagram followers, holding her removed breast implants she got seven years ago

“I can’t believe it’s been one week,” she said of her explant surgery. “This past week, I’ve been sore, but have felt incredible. More-so than the last few years. I went from being practically bedridden to having more energy to live.”

“This past week, I’ve been sore, but have felt incredible. More-so than the last few years.

“I went from being practically bedridden to having more energy to live.”

She went on to explain how her chest pain, shortness of breath and bad body odour had disappeared since her surgery.

“I feel mentally more clear, but still waiting for more on this. Acne is clearing up.

“I have colour back in my face again. My weight is finally budging for the first time in months.”

Sia said her husband hasn’t seen her this talkative in months.

“I credit that to me not being so anxious and depressed anymore,” she added.

“The toxicity of the implants themselves and my body trying to fight the foreign objects took a toll on me this year which lead (sic) me to remove them.”

Sia explained that she got breast implants seven years ago because she felt “really insecure” about herself and thought they would make her happy. 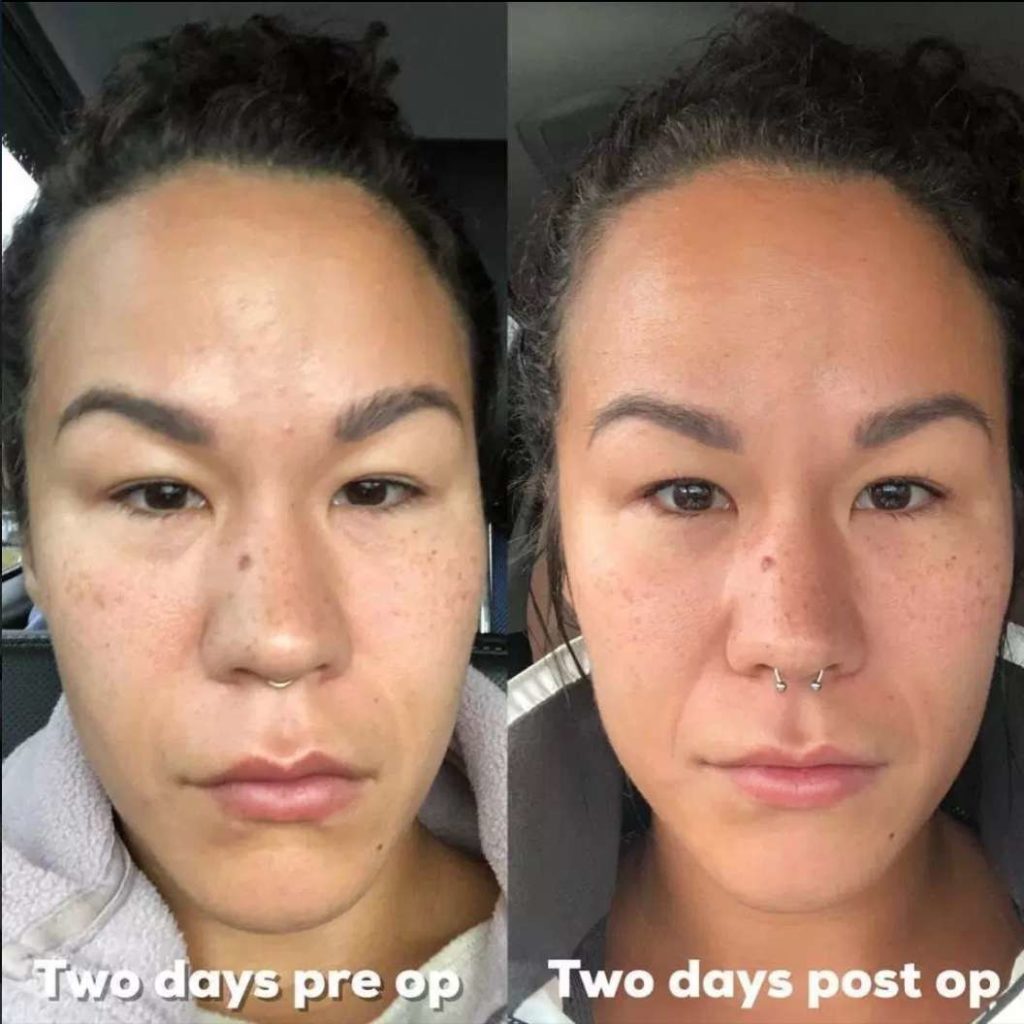 “I was married to my ex-husband at the time, and he really encouraged me to get them,” Sia said.

“He told me that they would make our love life spicier.”

After losing roughly three stone and being left with “tiny deflated breasts”, Sia said she “wanted to feel feminine again”.

She decided to get 400cc silicon gel implants, which were inserted through her armpits without leaving any scars.

She then went on with her daily life, but a few years later, she noticed her anxiety and depression had increased.

“I ate healthy, exercised regularly, but nothing would help me,” she said in her recent Instagram post.

“I saw so many doctors and took so many tests for no answers. I felt like such a hypocrite and fraud because I preached natural, healthy, and organic everyday and yet here I was sick from silicone and a bad choice I made seven years ago.

“It got to the point where I couldn’t workout anymore. I was that sick. I felt like an 80 year old when I was only 29.”

After having them removed, Sia said she now feels freer.

“I thought I would cry seeing my new breasts, but I haven’t,” Sia said.

“It feels amazing to be smaller again and they fit my body. I never thought I would say this, but I love my new (old) self.”

Update: yesterday I had my first post op visit since my explant. The drains didn’t get to come out just yet so we are going to see Doctor Chun again today to see if they are ready. The purpose for the drains is to prevent a hematoma or seratoma in my breasts and to aid in healing. I saw my breasts and showered last night for the first time. I didn’t cry like I thought I would. It was something I was so afraid of! Doctor Chun told me that the worst they’ll look like is at 24 hours post op and he was amazed at how much better they turned out since I denied a lift. I got my implants back to me in a bag which was interesting. He took my hands and told me to feel how heavy the bag was and wow.. I didn’t realize I was carrying so much weight on my chest, placing stress over my heart and lungs for the past 7 years. We weighed the implants and they were two pounds! So far I’ve noticed: 1. I can breathe deeper 2. I feel lighter 3. My face and skin actually produces oil again-used to be so dry. 4. I have less inflammation everywhere. I have a few other improvements that I’m noticing but i would like to wait until I’m at least 1 month post op or so before I claim them just to make sure. I’m just so happy to feel better. I honestly feel younger. They say implants age you, but I had no idea. The fatigue, joint pain, hairloss, and inflammation became too much for me and I had to make a change. Over the next few weeks they say my breasts will change and “fluff” out. I look forward to that and getting my health back to where it needs to be. It was hard preaching health when I wasn’t feeling very healthy so this had to happen for me. Thank you again for the support guys. It was a big step for me. I’m looking forward to improving and getting better. #breastimplants #breastimplantillness #bii #plasticsurgery #cosmeticsurgery

BREAST IMPLANTS MAYBE LINKED TO AN INCREASE RISK OF CANCER

The textured implants are the most commonly used type of breast implant in the UK.

It comes after it was revealed thousands of patients have been fitted with unsafe medical devices, like breast implants, hip replacements and pacemakers due to a poorly regulated approval system.

The investigation, which formed part of a wider investigation involving 58 media organisations including the International Consortium of Investigative Journalists and the British Medical Journal, revealed manufacturers of the implants didn’t carry out basic safety tests before selling them to the public.

In this case, the implant causes the white blood cells to divide.

Most cases have been treated by removing the implant but some women have required chemotherapy and radiation.

People tend to give themselves the freedom to indulge on things classified as ‘healthy’, but you should ALWAYS watch the quantity of food you eat.
END_OF_DOCUMENT_TOKEN_TO_BE_REPLACED

What a difference nine months can make! Kaire Konton-Smith has shared her incredible transformation photos after joining the 28 Day Weight Loss Challenge and all we…
END_OF_DOCUMENT_TOKEN_TO_BE_REPLACED

Did you know that the average Christmas dinner with all the trimmings can mount up to as much as 6000 calories?!!! Woah! And that’s just…
END_OF_DOCUMENT_TOKEN_TO_BE_REPLACED

The festive season is often full of temptation everywhere, it can be frustrating and so easy to lose track of your goals and maintain that…
END_OF_DOCUMENT_TOKEN_TO_BE_REPLACED

We have put together some tips for you to improve your motivation to strap on your trainers and get active today.
END_OF_DOCUMENT_TOKEN_TO_BE_REPLACED